Welcome and thank you so much for visiting the GameChanger website!

We are extremely excited to work on this film. It started in the winter of 2010-2011 when I was working on my thesis regarding Gene Sharp’s methodology on nonviolent resistance. I had received a grant to travel and research in Lithuania for three weeks. During those three weeks, I had the chance to interview the former President and leader of Sajudis, Vytautas Landsbergis, the Defense Minister during the late 1980’s Audrius Butkevicius, Lithuanian Parliament Head of the Unit for History and Commemoration of Parliamentarianism Dr. Angonita Rupsyte – key to the movement, Dr. Gene Sharp, and many other key participants which I will be introducing in upcoming posts.

This eye-opening experience inspired me to begin work on this film. The film will chronicle and analyze Lithuania’s resistance movements starting from 1944 all the way to independence in 1991 and will conclude with what Lithuania’s successful nonviolent movement means in global terms. Our current goals are to raise funds for archive and research costs, filming costs, production, editing, and distribution. Your support is key to this project relevant to the peaceful resolution of global conflicts. If you would like to make a donation, please visit our Kickstarter page at www.kickstarter.com.

The 60 second preview and interview with the director of the film, filmed at Balzekas Museum of Lithuanian History, is located below. 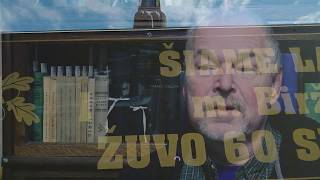